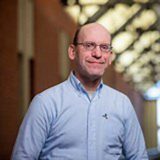 Garland, a central Wisconsin native, received his Bachelor’s degree in Animal Science at the University of Wisconsin River Falls. From there he received a Master’s degree in Animal Production and a Ph.D. in Ruminant Nutrition both from Iowa State University. After graduation Garland returned to Wisconsin to operate the family dairy farm and work as a nutritionist for Tomorrow Valley Coop. Garland returned to Iowa State University in 2003 to work for the Iowa Beef Center and became involved with the Beef Reproduction Task Force as software developer for the Estrus Synchronization Planner.